You will never be stuck for something to do in Hanoi, where ancient and proudly preserved Vietnamese culture is felt most keenly by visitors, and progress wrestles with tradition in different districts of the city.

Hanoi is actually over 1000 years old so the wealth of history here is mind boggling: temples, ancient citadels, unique theatre and stunning wilderness just outside the city all offer fun-filled days in Vietnam’s capital. Make sure to visit as many of these attractions in Hanoi as possible because they all offer entertainment, beauty and education at different turns. Enjoy our list of Top 10 Things to Do in Hanoi below.

Legend claims in the mid-15th century Heaven sent Emperor Ly Thai To a magical sword, which he used to drive the Chinese from Vietnam. After the war a giant golden turtle grabbed the sword and disappeared into the depths of this lake to restore the sword to its divine owners, inspiring the name Ho Hoan Kiem (Lake of the Restored Sword). Every morning at around 6am local residents practise traditional t’ai chi on the shore.

The ramshackle Thap Rua , on an islet near the southern end, is topped with a red star and is often used as an emblem of Hanoi.

Founded in 1070 by Emperor Ly Thanh Tong, the Temple of Literature is dedicated to Confucius (Khong Tu). Inside you'll find a pond known as the 'Well of Heavenly Clarity', a low-slung pagoda and statues of Confucius and his disciples. A rare example of well-preserved traditional Vietnamese architecture, the complex honours Vietnam’s finest scholars and men of literary accomplishment. It is the site of Vietnam’s first university, established here in 1076, when entrance was only granted to those of noble birth.

After 1442 a more egalitarian approach was adopted and gifted students from all over the nation headed to Hanoi to study the principles of Confucianism, literature and poetry. In 1484 Emperor Ly Thanh Tong ordered that stelae be erected to record the names, places of birth and achievements of exceptional scholars: 82 of 116 stelae remain standing. Paths lead from the imposing tiered gateway on P Quoc Tu Giam through formal gardens to the Khue Van pavilion, constructed in 1802.

This fabulous collection relating to Vietnam's ethnic minorities features well-presented tribal art, artefacts and everyday objects gathered from across the nation, and examples of traditional village houses. Displays are well labelled in Vietnamese, French and English. If you're into anthropology, it's well worth the approximately 200,000d each-way taxi fares to the Cau Giay district, about 7km from the city centre, where the museum is located.

Local bus 14 (4000d) departs from P Dinh Tien Hoang on the east side of Hoan Kiem Lake and passes within a couple of blocks (around 600m) of the museum – get off at the Nghia Tan bus stop and head to Ð Nguyen Van Huyen.

Visit stunning Halong Bay and overnight on a junk boat (a traditional Asian vessel) while cruising among the bay's 3,000 islands that rise dramatically from the emerald waters.

This thought-provoking site is all that remains of the former Hoa Lo Prison, ironically nicknamed the ‘Hanoi Hilton’ by US POWs during the American War. Most exhibits relate to the prison’s use up to the mid-1950s, focusing on the Vietnamese struggle for independence from France. A gruesome relic is the ominous French guillotine, used to behead Vietnamese revolutionaries. There are also displays focusing on the American pilots who were incarcerated at Hoa Lo during the American War.

These pilots include Pete Peterson (the first US ambassador to a unified Vietnam in 1995), and Senator John McCain (the Republican nominee for the US presidency in 2008). McCain’s flight suit is displayed, along with a photograph of Hanoi locals rescuing him from Truc Bach Lake after being shot down in 1967.

The vast prison complex was built by the French in 1896. Originally intended to house around 450 inmates, records indicate that by the 1930s there were close to 2000 prisoners. Hoa Lo was never a very successful prison, and hundreds escaped its walls over the years – many squeezing out through sewer grates.

Built between 1925 and 1932, this architecturally impressive museum was formerly home to the École Française d’Extrême Orient. Its architect, Ernest Hebrard, was among the first in Vietnam to incorporate a blend of Chinese and French design elements. Exhibit highlights include bronzes from the Dong Son culture (3rd century BC to 3rd century AD), Hindu statuary from the Khmer and Champa kingdoms, jewellery from imperial Vietnam, and displays relating to the French occupation and the Communist Party.

The Ho Chi Minh Mausoleum Complex is an important place of pilgrimage for many Vietnamese. A traffic-free area of botanical gardens , monuments, memorials and pagodas, it’s usually crowded with groups of Vietnamese who come from far and wide to pay their respects to 'Uncle Ho'. Within the complex are Ho Chi Minh's Mausoleum, Ho Chi Minh’s Stilt House and the Presidential Palace, Ho Chi Minh Museum and the One Pillar Pagoda.

Meaning 'Temple of the Jade Mountain', Hanoi's most visited temple sits on a small island in the northern part of Hoan Kiem Lake, connected to the lakeshore by an elegant scarlet bridge, constructed in classical Vietnamese style. The temple is dedicated to General Tran Hung Dao (who defeated the Mongols in the 13th century), La To (patron saint of physicians) and the scholar Van Xuong.

Take a walk through Hanoi’s Old Quarter street markets with a local guide who’s passionate about food, and discover the exotic flavors of Vietnam with fellow food-lovers. Sample fruit, hawker street food and local specialties like pork crepes, and visit Hanoi’s largest covered market, Dong Xuan. With a maximum of 12 participants, you’ll have a personalized experience on this walking tour of Hanoi’s best street food areas.

Known as the 'Paris of the East', Hanoi is one of Asia's most charming cities. Spend your private Hanoi full-day tour enjoying the essential sites including The Ho Chi Minh Complex and The Temple of Literature, the Museum of Ethnology, Ngoc Son Temple and picturesque Hoan Kiem Lake. To complete the day, take a cyclo tour through the historic Old Quarter and explore the many market streets dedicated to a variety of local wares. 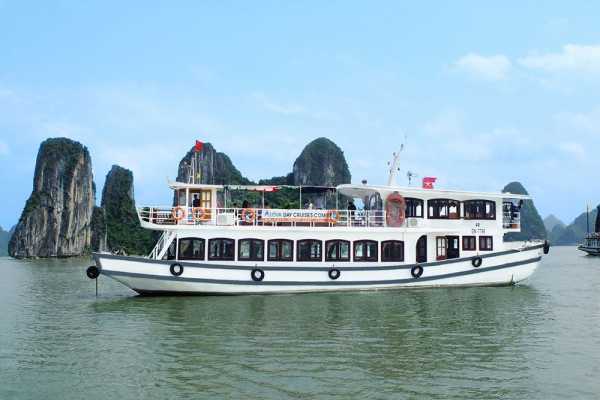 24h Tour providing Halong Full Day trip leads you to the famous Halong Bay beauty . Our well-designed cruising route offers you an excellent opportunity to see the most beautiful high points, in and around the water of the World Heritage site, in a very relaxed way. 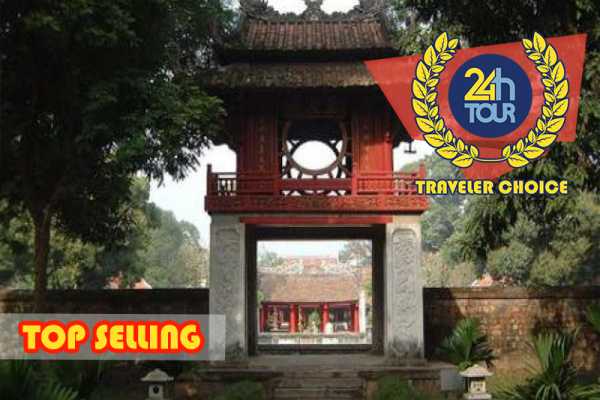 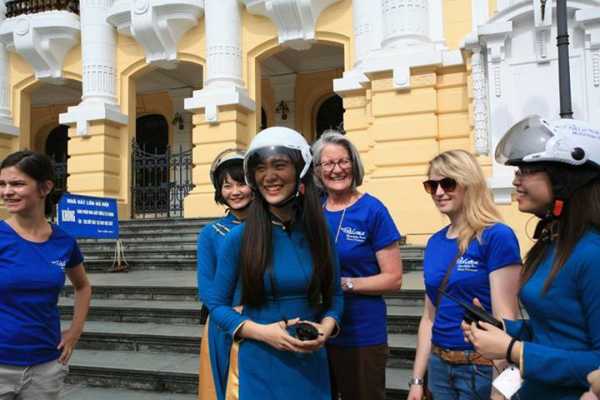 Hanoi is famous for the Old Quarter, unique custom and foods. Experience these fabulous tastes and sights and enjoy the streets of Hanoi by a motorbike tour around the Old Quarters, from the street food stalls, small local restaurants to West Lake and Ho Chi Minh Mausoleum. Come with an empty belly and we will send you home with a smile. Price Includes Motorbike with a high quality Helmet T-Shirt: Paloma Motorbike Tours Full Insurance Cover Tour Guide / English to Vietnamese Translator to drive your motorbike and answer your questions A male / female Tour Guide Leader and a male Tour Coordinator on the lead motorbike Head-set Communication System so Guests will be in constant communication with the Tour Guide Leader Fuel Wet Weather Poncho (if required) Free Hotel pick up and drop off Coffee / Tea / Cold Drink at the meeting point Guided Group Foot Tour of Ho Chi Minh Mausoleum including entry fee Morning Tea: a range of small Vietnamese snacks including Coffee / Tea / Cold Drink Lunch: unlimited amounts of authentic Vietnamese food from the menu to suit your taste requirements including unlimited drinks (Cold Beer / Cold Soft Drink / Tea). Price Excludes Gratitude / Tips to Tour Guide Bottled Wine and Spirits available during Lunch / Dinner Any items not mentioned above. Cancellation by Customer   More than 7 days prior: 10% of total rates.   From 4 to 7 days prior: 50% of total rates.   Less than 3 days prior: 100% of total rates.   No-Show: 100% of total rates. Children Price & Extra Bed Not recommended for children under 12 year old. 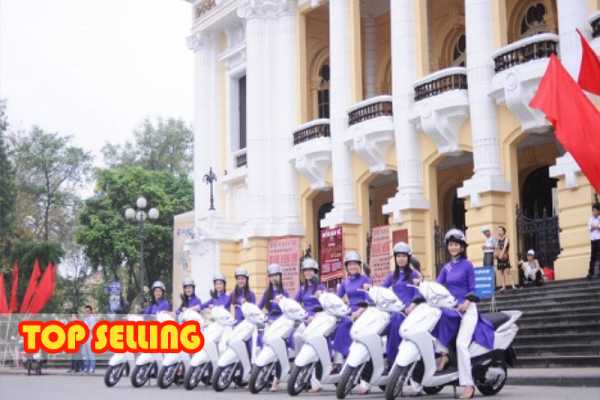 The Fabulous Food: The food of northern Vietnam is famous throughout the world. Hanoi is the heart of this gastronomic culture and with 24h Motorbike Tours you will experience a large range of these foods over the course of the tour. Whether it is hidden Street Food Stalls, Small Local Restaurants or a Massive Bia Hoi Restaurant with a view, our tour will find the perfect food scene to satisfy your gastronomic desire. Come with an empty belly and we will send you home with a smile on your dial. For the more curious and adventurous food lover, ask your guide about some of the foods only the locals eat, you will be surprised and intrigued at what you can find to eat on the streets of Vietnam’s Capital City. The Fabulous Sights: From the rich history and charm of the Old Quarter and Ho Chi Minh Mausoleum to the relaxed atmosphere around Lake Tay Ho you will see all parts of Hanoi in the allocated time at a safe, relaxed pace. The tour will give you a wonderful perspective of the city’s most popular and historic sights and you will have many of opportunities to get off the motorbike and take lots of photos. Experience these fabulous tastes and sights and enjoy the streets of Hanoi like a local today. 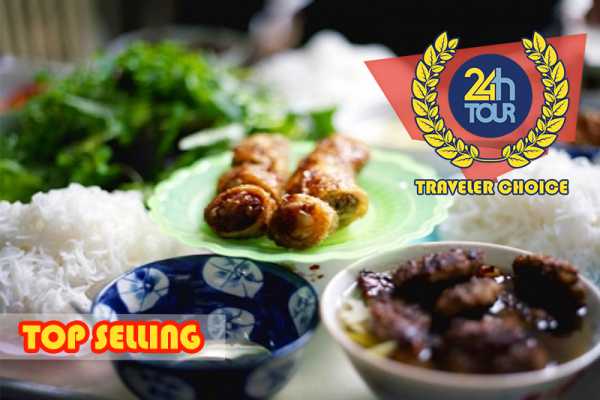 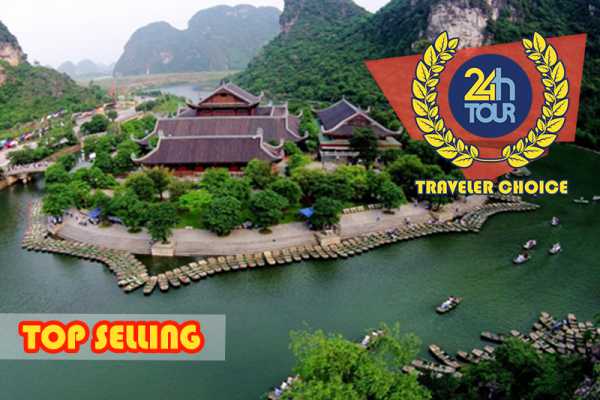 Join in this tour to discover the Vietnamese ancient capital and the magnificent beauty of thescenery of Trang An. Rather than superb attractiveness and geological interest of the landscape, you will find yourself attracted to its historical and cultural values. Spend just one day to experience how natural history and cultural history mysteriously mingle with each other.